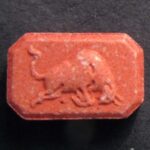 A red rectangular Red Bull tablet sourced in Long Island, NY was expected to be MDMA but tested as N-Ethylpentylone (also known as ephylone and βk-EPDB), a cathinone of the phenethylamine class that produces some of the same effects as MDMA, but is significantly stronger and substantially riskier. ‘Red|Buli’ appears on the reverse side of the tablet, which is scored.

People who have consumed N-Ethylpentylone have described the experience as “seedy”, “cracky”, and much less pleasant than MDMA. According to KnowYourStuffNZ, a harm reduction group out of New Zealand, “physical effects can include raised pulse and blood pressure, high body temperature, convulsions, acidosis, and rapid muscle breakdown. Psychological effects include agitation, paranoia, compulsion to redose, difficulty sleeping for up to 36 hours, and temporary psychosis.” In addition, N-ethylpentylone has been involved in the deaths of many individuals. The substance is becoming more prevalent in both the US and abroad, and is mostly being marketed as MDMA to unknowing purchasers. 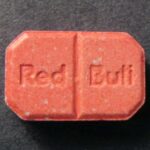 According to EcstasyData.org, the Marquis reagent turned orange/yellow, the Mecke reacted orange/yellow, and Mandelin turned yellow. The submitter notes stated: “Tested by taking one half of pill at 8:30pm. Felt very social and enjoyed that aspect. As effects wore off I felt very uneasy. My chest felt heavy and could not sleep till 5:30am. Felt shaky the next day till about 4pm. Did drink tequila and smoke Sativa later that night.”

We urge our community to keep in mind that drug markets are expansive and these substances may appear in locations other than the submission’s origins. Always test before you ingest to avoid ingesting misrepresented substances. Purchase your DanceSafe drug checking kit here.

If you test a misrepresented substance, please submit it to testit@dancesafe.org to be featured in a #TestIt Alert.

Since 1998, DanceSafe has been keeping the electronic music and nightlife communities safe. As a 501(c)(3) nonprofit, we provide free harm reduction services at music festivals and nightlife events across the nation. All proceeds from the sales of our drug checking kits go back into the organization so we can continue to provide our services in our communities for free. By purchasing a kit, you are not only helping keep you and your friends safe, you are also contributing to the harm reduction movement. Thank you for your support!